Or: We got this one wrong.

Back in 2009, we got excited when we heard that LED lights didn’t attract bugs. We do love LEDs for a variety of reasons already -- long, long life; low, low energy consumption; and good, high quality light. (Also, the cool factor.) The thought that they might also keep the bugs away seemed too good to be true until we saw some credible sources explaining that LED lights emit very little light in the UV spectrum, and that it’s UV light that attracts bugs.

Blue light, it turns out, also attracts bugs. I emailed Andrei Alyokhin, an entomology professor at the University of Maine, asking if he could “shed some light” on the matter. He responded:

“Insects are mostly attracted to UV light and blue light. They cannot really see red light. Warmth plays a minor, if any, role. So, insect attraction will depend on the wavelength of the LED light used by the homeowners.”

We then found a nice graph from the Microscopy Resource Center illustrating the wavelengths emitted by various light sources. Here’s what it looks like: 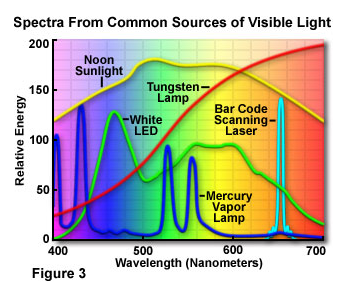 … Confirming that, yes, white LEDs produce a significant amount of blue light, which also attracts bugs -- explaining why, as some commenters on the previous post noticed, most LEDs are not immune to molestation by members of the insect community.

This past weekend we tested the theory in the real world -- specifically, outside a cabin in Northern Maine, where the bugs are a-plenty -- using a Pharox 6 Watt LED bulb (this bulb is intended to replace a 60-watt incandescent bulb, although it only produces 360 lumens -- less than half of what a 60 watt incandescent would produce) and a GE Reveal 10w, 400 lumen CFL (just a slightly higher output than the LED, it’s marketed as a 40w replacement). We placed the two bulbs in fixtures on either side of an exterior door. Lo and behold, both, sadly, did attract bugs.

Again, we apologize for propagating what has proven to be a myth, and apologize if our previous post has caused any confusion or inconvenience for you, our beloved readers.